To marketers and ad managers with China being their target market, Bytedance apps, particularly Toutiao and Douyin, are growing to be the most attractive media for advertising. In China’s digital realm, SEM/PPC ad faces a problem of traffic decrease, and Wechat ad is getting more and more costly; this to an extent, enforces marketers taking one step further to try out Bytedance platforms for advertising. In this post, focus is on Toutiao, the news aggregator in Bytedance apps family.

As introduced in an earlier post of Toutiao Ad, there are three ad formats on Toutiao:

Among the three, Feed Ad with its performance driven attribute and relative low start-up investment requirement receives the most popularity. However, there’s a big chance that you end up wasting several months’ ad budget and yield little on Toutiao, if you’re following the same code of act used on Wechat or Weibo advertising. To achieve success on this platform, you need to understand the specialty of it. In the following paragraphs I will unveil some hidden rules of Toutiao ads.

One of the greatest differences of Toutiao from other ad media is that it votes for new than old, may it be the targeting, ad copy or landing pages. SEM/PPC ads even have scoring system for each ad campaign and the campaign with good history performance (ie. high score) will win the bid and get more exposure. Wechat campaigns differentiate themselves with new targeting or new ad copies, and a star campaign can keep bringing in conversions. However this is not how it works with Toutiao. Campaign life-cycle on Toutiao is short, even your hottest campaign gone cold fast. To obtain continuous results, you need to set up quality campaigns on a regular basis and replace weak performing campaigns with new ones constantly.

Getting online sales leads might be the most important goal of advertising to nearly all B2B companies, same for getting direct sales to B2C companies. Catering to this need ad media introduces some performance bidding mode, like CPA, aside from traditional CPM and CPC. In the most recent years another type of bidding mode appeared: oCPM/oCPC.

oCPM, or Optimized “cost per mille” (cost per 1,000 impressions) shows your ad to people who are more likely to take the action you set as goal at a cost that is as close to the bid you set as possible. For example, if the campaign goal is to drive customers to your website(getting clicks), an optimized CPM bid will be shown to people who are more likely to click on your external link. Three most common goals are:

Honestly, if you’re bidding to get impression or clicks, traditional CPM/CPC is sufficient enough. Conversion oriented campaigns are where oCPM shine. Talking about conversion campaigns, marketers are more likely to work with the CPA mode when it’s offered as an option, and this makes sense on many platforms, but Toutiao is certainly an exception.

Based on real practices, oCPM brings best performance, in terms of conversion, CTR and cost per conversion. oCPM beats CPA at allowing Toutiao engine to find and advertise to right audience with high converting potential. When used properly, Toutiao ads can be rewarding by bringing in more conversions with low cost. Below is to share a channel comparison of leads acquisition for a B2B company. From it we can see that comparing with the search engine channels, which are widely recognized as the most efficient channels for lead generation, Toutiao might not bring the same number of leads but certainly it is the most cost effective channel. 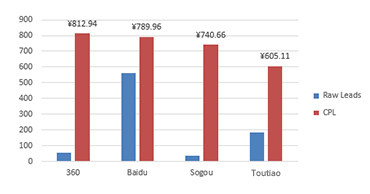 Why is the case?

It’s all rooted in the Bytedance apps algorithm, the content-recommendation mechanism powered by machine learning technology. Toutiao feeds its users the content tailored to their interests, so Toutiao expects advertisers to constantly come up with new ideads and interesting ads to contribute to or at least sustain the Toutiao circumstance rather run the same ads with the same content once and once again. Powerful AI boosted machine learning ability also enables Toutiao to find right audience effectively, and that’s why automated bidding mode like oCPM outperforms traditional CPC/CPM/CPA on this platform.

With what’s being said above, to make Toutiao ads working, marketers and ad managers need to shift strategies and try new practices. Below is a list of acts you can start from: